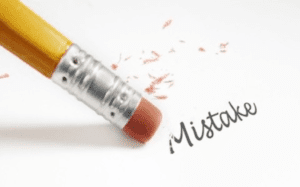 Nobody’s perfect. Everyone makes mistakes. It’s part of life. While nobody likes making mistakes they are not necessarily a bad thing. You may have discovered that one of the best things about mistakes is it is one of the best learning experiences you can have.

For the most part, we try to avoid making mistakes. Why?  Because when we fail we experience pain. Pain is a remarkable driving force in our lives. According to the science of NLP (Neuro Linguistic Programming) our brains are wired to focus 80% on avoiding pain, and 20% on moving toward pleasure. We automatically approach the situations in our lives out of a fear of what could go wrong. Our background conversation and attention is on, “what’s the danger here?”  And that leaves us trying to avoid making mistakes ~ avoiding the shame, the embarrassment of a mistake, and generally avoiding the pain. So we attempt to strategize how to not make mistakes.  But the truth is it’s impossible to avoid making mistakes. Carl Jung said “what we resist, persists.” And our observation is that the more you try to avoid making mistakes the more likely you will make them. You might be better off doing your best and dealing the mistakes when they happen.

There are some very famous, successful people in history who failed miserably many times over. Almost everyone can name the man that invented the light bulb. Thomas Edison was one of the most successful innovators in American history. He was the “Wizard of Menlo Park,” a larger-than-life hero who seemed almost magical for the way he snatched ideas from thin air.

Chances are you haven’t heard of Edison’s botched ideas ~ he had many, many failures, (estimated over 10,000 failed experiments).  But Edison didn’t dwell on them. It’s been said, “Edison’s not a guy that looks back. Even for his biggest failures he didn’t spend a lot of time wringing his hands and saying ‘Oh my God, we spent a fortune on that.’ He said, ‘we had fun spending it.’”

And Abraham Lincoln failed at many things before becoming President. In 1831 Lincoln failed in business; 1832 he was defeated for state legislator; 1833 tried a new business and failed; 1835 his fiancée died; 1836 he had a nervous breakdown; 1843 ran for Congress and failed and again in 1848; in 1855 he ran for Senate and failed. In 1856 he ran for Vice President and lost. Then in 1860 he was elected President of the United States. What matters is not how many times he failed, but how many times he never stopped trying.

In my business, in my clients’ businesses, the greatest learning happens from failures.

At our firm we let our employees know that mistakes are not only tolerated, we encourage them, especially with new people who are trying to make a good impression. At the same time, we encourage them to learn from the mistakes and not repeat the same ones. There are so many other possible mistakes to be made. There really is a lot of value in making mistakes. Though it’s painful to make a mistake, there is much more pain having not made a mistake. People will make mistakes. Trying to avoid them is the first mistake. Use the mistake to make a difference. And don’t repeat that mistake.  Go ahead, make the next one instead.