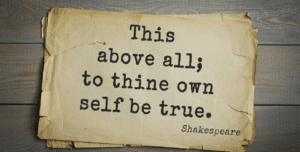 Without authenticity you can forget being an effective leader. Sound extreme? Over the last decade authenticity has emerged as one of the most critical aspects of leadership. In an article, Authenticity Paradox by Herminia Ibarra (Jan-Feb 2005 Harvard Business Review), the author says, “Authenticity has become the gold standard for leadership.” However, she adds, “a simplistic understanding of what it means can hinder your growth and limit your impact.” Why? Because authenticity is not as simple as most people would like to think it is or assume that it is. Many people see authenticity as being “transparent” and therefore one must air ones every emotion and thought publicly. That kind of see-through self is not authenticity at all, in fact if you go about broadcasting your constant internal state it will end up undermining you for a couple of reasons.  First, nobody wants to hear all that stuff. For God’s sake they can hardly stand the noise generated by their own internal state. And second, what’s going on with you internally is not who you are; nor is it what you stand for and therefore it is not your authentic self. On one hand authenticity is certainly not broadcasting any and all utterances from one’s internal state on loudspeaker, and on the other hand it is being honest and straight on where you stand in any given matter. Perhaps more importantly, authenticity requires being aware of and owning one’s weaknesses.

Authenticity requires extraordinary courage ~ what Brene Brown calls “Standing your sacred ground”.  For most it is not an attractive challenge and seen as something to dodge or avoid. I recently introduced the notion of authenticity to a newly advanced group of high-potential, up and coming managers in a Fortune 100 company. Not only did they not like the whole idea of authenticity, they began making a case for why being inauthentic was a better way to go. They cited examples of how they couldn’t say certain things to their immediate supervisor and certainly couldn’t ever say “no”.  They were sure they had to act as if they were on board for something they clearly were not. They had to say “yes” to things they knew they weren’t going to do. And they justified this by saying “everyone else does it, why shouldn’t I?” That’s all under the guise of “you have to play politics in organizations”. While I could appreciate that they had developed a style for not rocking the boat by acquiescing, I asked them to consider that when they’re doing that it is fairly obvious to the others in the room that that is what’s going on, and that at some level they had entered into a truce to conduct and be part of a charade of looking good as opposed to being authentic. Instead I asked them to consider what it might be like to actually be authentic ~ to deal with the issue at hand, instead of just “going along”. Because there’s a good chance that if something doesn’t land right for them it’s not landing right for someone else as well. Furthermore, they’re skillful in bringing issues to the forefront which might allow for the real issues to get resolved, as opposed to what usually happens which is everyone walks out of the meeting having heard what they wanted to hear and at some level knowing that isn’t what’s going to happen ~ destined for failure.

This is what separates authentic leaders ~ authentic leaders stand in the future. They can see the consequences down the road of being inauthentic. And they address anything in the present that is likely to thwart or block the future. If they don’t believe something is possible or doesn’t make sense they are compelled to say so. It does not give them license to be disagreeable, but it does require them to say where they stand in the matter. Again quoting from Authenticity Paradox, “Being authentic doesn’t mean you can be held up to the light and people can see right through you.” It’s a double-edged sword. On one hand you make your true position and feelings in the matter known, and on the other hand you stay above the fray of sharing your every thought, consideration and concern. Another way to think of this is to be able to present a mature and realistic version of your position on something without necessarily having to expose each and every flaw, and at the same time being aware of one’s weaknesses and flaws is critical to being authentic and therefore being an authentic leader.