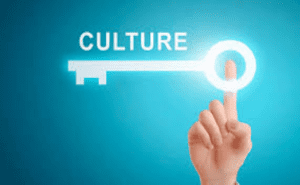 Step back and look at any organization what you will see is the manifestation of its culture. By culture we mean values, themes, behaviors, passions expressions and actions that take place inside a group ~ in this case a company. Culture gets established by a combination of 1) how the company was built, 2) its history and evolution 3) the leadership that is being provided inside that company. People inside the company operate consistent with whatever culture has been established or set. The leader’s job is to create a culture that serves the needs of the stakeholders ~ its people inside and outside the company, meaning employees, customers and suppliers. Whether or not these themes and values are overtly clear to the people in the organization, will dictate the extent to which the people themselves operate consistent with the culture. Obviously it’s most effective when those values and behaviors are made public and clear to the people in the organization. We have found that the best way to do this is to have those values in writing made public and talked about regularly. Several of our clients have done a splendid job of doing this and in one company in particular it’s pretty hard to walk down a hallway and not see the values of the company posted for all to see. Our experience of companies that do this well is that the employees are keenly aware of these values and are more likely to operate consistent with them when they are vividly displayed. One of our clients has their values up on the walls about every 15 feet.

There are some recent examples of companies who went off course because the values of the company were not patently clear to the management and employees. One such example is Wells Fargo Bank which is an institution that built its reputation on integrity, trust and financial prudence. That translates to “you can trust our company with your money.”  However, recently people in the company lost the plot and the company began managing growth and new customer acquisitions “at any cost”.  They began to favor and incentivize gaining new customer accounts over being trusted custodians of their customer’s finances.  The compensation system began to reward people making the “numbers” vs. people providing excellent service and financial prudence. Consequently, the employees began inventing fraudulent “new accounts” using established customers’ finances without those customers knowing or giving permission to use their information to do so. This unethical behavior was completely inconsistent with what Wells Fargo has stood for for over 100 years. How could this possibly happen? It happened because integrity got replaced inside the culture by greed. The culture had become corrupted. The leadership began leading for near term gains and abandoned the timeless values that made their company successful for decades.  When all of this was discovered and came to the surface, Wells Fargo lost the confidence and trust of the public and they are now hard at work trying to rebuild that trust and reformulate a culture that seemingly got destroyed in a relatively short period of time. Now they’re investing millions of dollars to market contrite apologies and begging for another chance to prove themselves.

Another example of a culture going off course is with Facebook. Facebook made its mark as it   was originally designed to serve people by connecting them and providing a platform where people could share their most personal details, family events, special occasions, and connecting with old friends and lost relatives. It fulfilled on that purpose for many years delivering unimaginable growth for well over a decade. However, the people at Facebook saw opportunity to take this information, peoples’ personal information, details, behaviors and habits and use that information to exploit the people who trusted Facebook to deal with this information ethically. It began to package and sell this data so that companies could target markets, and as we now know, even influence peoples’ thinking about social and political issues. People literally began being co-opted (brainwashed) by sinister campaigns that would post fabricated stories and information to sway peoples’ thinking or to incite consternation. Again, how could this happen? Sadly, again the answer is greed. The culture became corrupted. Facebook saw the opportunity to exploit its customers and took it. Why? Because the values set at Facebook were focused on growth and expansion and not being a custodian of peoples’ personal information.

In both cases what happened is a failure in managing the culture. I give both companies the benefit of the doubt that they once had noble, admirable and ethical intentions, but those things were not translated over time into the culture by leadership. The leadership failed to do its job to 1) set the vision, 2) have a strategic plan, and 3) get people excited about it and get on board.  And as we all know in both cases, when it went off the track it did enormous damage to both of those companies respectively. When the values of a company are made clear, public, are talked about and validated, it is our experience that the people in the company line up around those values and behave consistently with them. When they are not clear people are left to do whatever else they might do because there’s nothing guiding the course and therefore their behavior. The key is to have the leadership set the values of the company once they really believe it and stand for it. Make those values clear and public (displayed vividly), roll them out to the employees and keep revisiting and reinforcing them to validate them. Our experience is that when this happens companies stay the course. They live and breathe the values. And when that is not the case it sticks out like a sore thumb. In short, culture drives behavior.